Andy Hicks grew up in a household filled with music lovers. He received his first guitar on his 11th birthday – a gorgeous 3-tone burst Fender Stratocaster. Andy spent his teenage years playing along with his favorite Nirvana, Black Sabbath and Metallica records. He played in local rock bands and by his early 20s he became increasingly interested in experimenting with guitars by modifying pickups and wiring.

In 2009, Andy decided to take this passion for guitar building seriously by enrolling in the Guitar Craft Academy in Hollywood, a 6-month program focused on electric guitars. Within a week of graduating, he started working at Fender in the Jackson Custom Shop dressing frets. From 2013 to 2018, he worked as an assistant to Gretsch Custom Shop Senior Master Builder, Steve Stern. Andy worked with various artists during this period and is very proud of his involvement with the Malcolm Young “Salute” Jet. In 2018, Andy seized the opportunity to become the lead builder and production manager for a high-end boutique guitar company and was subsequently recruited by James Tyler to oversee production for his shop in the San Fernando Valley.

On his return to Fender, Hicks said, “coming back to Fender, becoming part of the most prestigious custom shop in the industry, and being around so many talented builders is incredibly exciting and humbling. It also feels like I have returned home.”

When it comes to guitars, Andy incorporates his two passions: playing and building guitars. He firmly believes that these two passions are deeply connected, uniting Andy’s core approach to creating guitars. “I love interacting with guitarists,” Hicks said. “Bridging the gap between builder and player, listening to their desires and implementing them into my builds is incredibly rewarding,” and to create such guitars in the Fender Custom Shop, “nothing could be better,” he added.

When not building guitars, Andy plays in an epic doom metal band, Stygian Crown, enjoys playing Dungeons and Dragons and goes on incredible Disneyland trips with his wife and 3 boys. 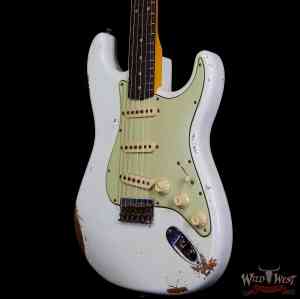 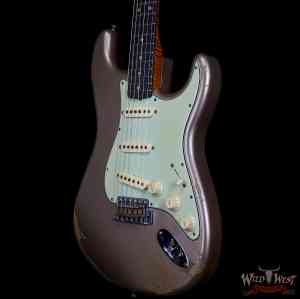 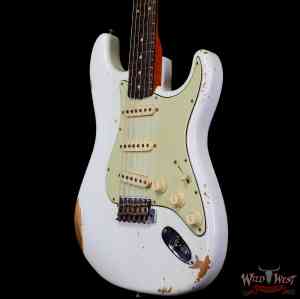 Fender Custom Shop Andy Hicks Masterbuilt 1961 Stratocaster Roasted Flame Maple Neck Brazilian Rosewood Board Relic Olympic White
Get this item for as low as $795.49 / month
based on a purchase price of $9050 at 10% APR for 12 months.
How Financing Works