In 1995 I was a senior master builder in the Custom Shop at Fender, and I was assigned the project of recreating the 1946 prototype of what would evolve into the Telecaster.

I was fortunate enough to have access to a very comprehensive set of photos of the original, and also had access to the original guitar it’s self, and was able to make a set of tools and templates.

We made two examples, which we showed at the 1996 NAMM show.

As a result of this project I had the great fortune of meeting and becoming friends with George Fullerton, who was heavily involved in the building of the original.

I was very excited about doing this project for Wild West, because it afforded me the opportunity to mix an old design with some newer, traditional designs, and throw in a couple of my own ideas. This along with suggestions, and assistance of Ian at Wild West, produced what I think is a great sounding, and playing guitar.

They were built with the traditional classic materials, the way they did it in the 40s and 50s.

The “Snake Head” headstock is derived from the Fender steel guitar, which is where Fender got its start.

These guitars are unique and highly collectible.

They are fitted with my Hand Wound Pickups. 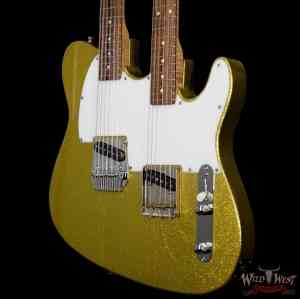